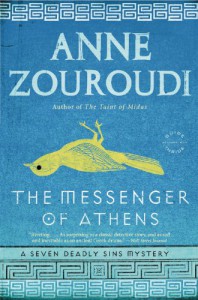 I liked this book, although not as well as I liked Doctor of Thessaly, which I read first, not realizing it was the third in a series. This one was pretty much unremittingly dark. Although it takes place on an island in Greece, it's during the cold season when there is neither sun nor business. The relationships between the residents seem driven largely by suspicion, greed, and selfishness, even between family members and especially between husbands and wives. But I do enjoy the author's descriptive powers and thorough characterizations. Make no mistake; her stories are no action-packed thrillers. The plot moves slowly as she carefully sets the scene. It's like you're there. And although you leave the book with some questions unanswered (particularly about her odd main character, "the fat man" detective Hermes Diaktoros), there is the immense satisfaction that, unlike in real life, the people in the story get exactly what's coming to them; the fat man makes sure of that. Corrupt cops, hard-done-by wives, cowards, lost souls...Diaktoros metes out fitting justice to them exactly like the demi-god I suspect he is.