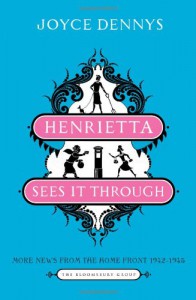 Dennys was frustrated during WWII; frustrated with being "the doctor's wife" rather than her own person, with her role as a housewife, and mostly with being made to feel guilty about not "contributing" more to the war effort because she was an older & provincial woman. She vented these frustrations through her character Henrietta, who writes letters to her childhood friend Robert, away fighting. Henrietta is charming and honest and I adore her. I enjoyed this sequel to "Henrietta's War" even more than the first book because as the war went on, it further frayed people's nerves, strained friendships, and polarized people's views, and Dennys addresses this deterioration openly and poignantly. Londoners particularly could be self-righteous about their role in dealing with bombings. And yet provincial folk had to deal with evacuees and of course, the loss of their menfolk. For example, in one scene, an Admiral's wife has learned in the morning that her son was killed in action, but she keeps it to herself and goes on to play in a charity croquet tournement in the afternoon, rather than spoiling the event by bowing out. A Londoner happens upon the event:, "'My dear, croquet!' said the Lady Visitor to her companion. Then she gave a little scream. 'Oh! And bowls, too! How sweet! Of course, these people simply don't know there's a war on!' The Admiral dropped his pipe on the grass. As he stooped to pick it up he laid his hand for a moment on Mrs. Admiral's knee."

In addition to wit and perspicacity, the book features Dennys's humorouos line drawings, which remind me of New Yorker cartoons of the time. She was an artist before she was a writer.
Tweet