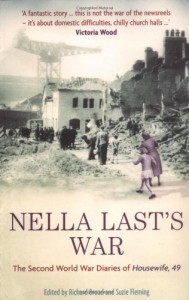 Nella Last was a volunteer in the Mass Observation, which began in Britain in 1937 and went through the early 1950's. Ordinary people were asked to keep diaries of their everyday lives, to "create an anthropology of ourselves." Actually, the Mass Observation Project was revived in 1981, although personally, I can't imagine I'd find the Thatcher years all that exciting to read about.

Nella's diary entries were some of the best of the M.O., being frequent, interesting, and honest. This was great background reading for all of the novels, short stories, and fictional diaries I've been reading from the war years in Britain. Nella had her first child at the end of WWI, so by WWII, both her sons were old enough to serve. Her diaries cover the Phoney War, the Blitz, the painful rationing, and the strain as well as the comradeship of wartime. The war was much longer and tougher in Britain than it was here. Nella was the quintessential Brit, remaining cheerful and keeping busy "doing her part" for the war effort, serving tea, sewing and knitting for the hospital, and running a shop for the red cross. But her entries show us the true price of "keeping a stiff upper lip" and trying to keep everyone else's spirits up.

Nella painted vivid pictures of her contemporaries, both family and friends and she did not spare them (or herself) one bit. I enjoyed reading the opinions of the war and the guesses about the future as the years progressed. Nella was smart (although she was only just realizing that during the war) and fairly liberal in her opinions and she was often right in her guesses.

But I guess the most fun aspect of the book for menus Nella's blossoming confidence and realization of her value as a wife, friend, and mother. I would like to have met her.
Tweet