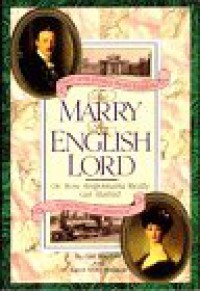 If you want to better understand the novels of Edith Wharton and Henry James, to get the jokes of Charles Dana Gibson and Oscar Wilde, or just to enjoy the highbrow soap opera that is Downtown Abbey more deeply, this book will help. Covering the years between the end of the American civil war and the death of King Edward VII in 1910, this book gave me a fairly good understanding of why American heiresses were marrying titled Englishmen in droves (more than 100 did, including Winston Churchill's mother) and what that meant for both (high-society) cultures.

It wasn't just that the moribund English upper crust needed vulgar American bucks to prop up their pricey habits and accouterments (which included huge, drafty, crumbling, damp houses and the army of servants those required). The heiresses had their goals too. They were often from families whose shiny new money wasn't enough to impress that stiff-backed New York star-maker, Mrs. William Astor. Mrs. Astor had some serious rules. For example, if you bought a Paris dress, you couldn't wear it. God no. What are you, a Philistine? You had to store it for a year or two so it didn't look like you were showing off your wealth, although you certainly were. That was key to most the rules: To show off without seeming to, using a complicated code of card-leaving and cutting. Mrs. Astor was a woman who made her husband drop his middle name, Backhouse, because she thought it vulgar. Mrs. Astor and New York society had many words to describe upstart nouveau riche people who thought they could break into rigid Knickerbocker NY Society, including arrivistes, parvenus (French is so good for insults, right?), bouncers, shoddees, swells, vulgarians, detrimentals...the list goes on.

In short, if Mrs. Astor didn't "know" you, you might as well use your oodles of money to buy status overseas. The bummer there was that most the guys with that kind of status were, well, assholes really. And then their dour families and dank, isolated homes weren't much fun either. Still, some of the heiresses managed to pull it off, usually with an invigorating stream of affairs or a bent for charity work or politics. This book reads like a gossip magazine and even though the gossip is over 100 years old, it still feels fresh. There are loads of fascinating details about the cultures of the respective richy-rich cultures. My take-away is that you couldn't pay me to live in either culture, but it's interesting to investigate it under a microscope.

I'd give it four stars, but the layout drove me crazy. Every couple pages, there's a double-page spread with side information. So if you want to read the text, you have to keep skipping pages and then remembering to go back to read the side information. It made it choppy and hard to follow. It would have been better to group those spreads in chunks, leaving more pages between of uninterrupted text. Also, most of the many illustrations are useless because they're so small and poorly reproduced. I'd rather have fewer, better pictures.
Tweet